Scenario: A Queen in Trouble 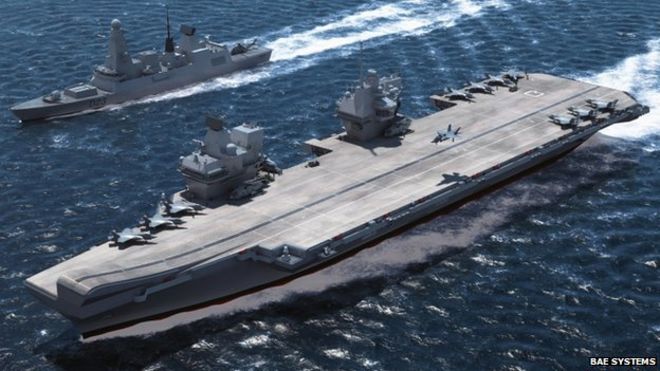 The aircraft carrier HMS Queen Elizabeth was the pride of the Royal Navy when she was commissioned in 2020. Britain had not had a carrier since HMS Invincible retired in 2005, and the politicians were eager to show what a difference the new ship would make. Within months the carrier was dispatched with a task force to West Africa. Britain was force again, and Britannia ruled the waves.

At least, that was the plan….

The task force was there to assist with a political situation typical for the region. A friendly democratic government had been toppled in a military coup. Rumour suggested that the coup had been covertly encouraged by Chinese interests, who had their eyes on rich mineral reserves in the country’s interior.

Gangs of soldiers ran wild in the capital, killing and looting. Foreign nationals lay low in their villas and hotels or took refuge in the embassies.

Britain was part of the multinational effort to restore order. If military action should prove necessary, the HMS Queen Elizabeth would provide air power, in the form of thirty-two brand-new F-35B Lighting II combat aircraft. These would assist ground troops from neighbouring African countries. Britain would play a part without putting boots on the ground, and the Prime Minister looked forward to a swift victory untarnished by any British casualties.

Shortly after the Queen Elizabeth and her Royal Navy escorts arrived, unidentified aircraft were detected on radar. F-35 air patrols made visual contact and confirmed that the carrier group was being shadowed by dozens of small, unmanned aircraft.

The drones were quickly identified as a design originally manufactured in China under licence from Israel, but copied by Taiwan and several other countries. Known as Hong-Jian (Red Sword), the drones had an eight-foot wingspan and solar panels on their upper surface which, combined with soaring software to take advantage of wind shear, allowed them to fly for days on end. The drone was made of Kevlar with carbon fiber reinforcement, with an on-board Android autopilot and an explosive charge about the size of a hand grenade. They were disposable, costing a few thousand dollars each on the international market, and as cheap but deadly kamikazes the Hong Jian had already made their mark in several minor conflicts.

Satellite imagery supplied by the US showed crates of Hong Jian drones being offloaded in the capital’s port from a Panamanian-registered cargo ship. The minimum estimate was that several thousand were already on the dockside or in nearby warehouses. Technicians were busy assembling the drones and launching them from catapults, watched by a small crown of curious locals. The nationality of the technicians was the subject of much speculation.

The self-styled “Field Marshal and President for Life” who led the coup issued a statement that his air force had the British Task Force surrounded. He denounced “all forms of colonial imperialism” and demanded the British withdraw to an “exclusion zone” some two hundred nautical miles away — or face the consequences.

The official response was an elaborately diplomatic refusal. The British Admiral commanding the Task Force made an unofficial but widely-reported response:

“I’m damned if we’re going to run away from some tinpot dictator with a lot of toy aircraft.”

The first wave of Hong Jian drones attacked just after dawn. There were over two hundred of them, and they converged from all points of the compass. They flew straight at the vulnerable parts of the ships, the radar domes, radio masts and antenna arrays. The straight lines and flat planes of the ships were simple geometric patterns that made it easy for the drones’ cameras to locate their programmed point of attack.

Although too small to be hit by anti-aircraft missiles, many of the drones fell victim to the radar-guided 30mm Oerlikon cannon and multibarrel Phalanx guns on the British destroyers, as well as the numerous rapid-fire miniguns mounted on deck rails and manned by sailors.

Video analysis showed that about a dozen of the attackers got through. There was virtually no damage, except for an F-35 which has been preparing for take-off on the flight deck of the HMS Queen Elizabeth. A drone had skimmed over the carrier’s deck and struck one side of the plane. The subsequent fire had been quickly brought under control and there were no casualties, but the £100m aircraft would require days of repairs before it could fly again.

The Royal Navy Electronics Warfare officers were experimenting with jamming the drones’ communications, but met with limited success. The drones barely used any signals at all, and with just a few pulses spread over a wide swathe of the spectrum. The swarm was flying itself with minimal human input.

Two hours later radar detected a second force of drones assembling to the West of similar size to the first. The drones were spaced about a hundred meters apart, forming a spherical cloud almost a kilometre across.

When an aircraft was sent up to monitor them, the entire cloud started converging on it. The pilot flew around the swarm and watched it gradually change direction to chase him. The drones could never catch the fast jet, and the pilot shot down a couple of drones with cannon fire, but he had to be wary of flying too close to the swarm.

The pilot was ordered to break off. He could not do significant damage to a swarm of several hundred drones, and there was too great a risk of an accident against so many. A goose or duck could damage a jet turbine; a drone with an explosive charge would wreck it. And these drones were determined to intercept the plane if they could.

A smaller cloud of several dozen drones then appeared in a loose formation between the carrier group and the airborne F-35. They had been skimming the sea at low level and had not been appeared on radar until they were a mile or two away. They were set on ambushing the pilot as he tried to return to the HMS Queen Elizabeth. When the pilot was redirected to approach from the opposite direction, half of the drones moved to block his approach.

The F-35’s fuel was approaching a critical level. Rather than run any risk of losing a plane for no advantage, the pilot was ordered to divert away from the carrier group and land in a neighbouring African country. The plane sped away from the swarm at four hundred miles an hour while the necessary diplomatic arrangements were made.

Running away might look bad, but losing an aircraft would be worse, and the Admiral could always say that the plane was diverted for technical reasons. The plane might be saved, but with the increasing number of Hong Jian, now forming several swarms in all directions, it was not safe to fly from the carrier.

Bad news was to follow: several hours after the F-35 landed, twenty drones caught up with it while it was parked on the tarmac. A film crew had just arrived to shoot a wildlife documentary, and were filming the plane and trying to interview the pilot when they spotted small drones circling overhead. The drones made several passes, apparently making sure of their target before diving en masse at the F-35.   After the tenth hit the plane disappeared in a massive fireball.

Shortly afterwards a second wave of drones was picked up on radar as it prepared to attack the task force. This time the drones zig-zagged as they came in, making them harder to hit, and they all headed for one ship, the destroyer HMS Griffin. Again hundreds of drones were shot down, but this time forty got through and each one headed unerringly for a target.  The attack was made more deadly by drone which had climbed to several thousand feet and dived vertically, making them almost impossible to stop.

Several crewmen manning machine guns on deck were killed and many more injured, and there were multiple hits on the fire control radar for air defence and on the Phalanx guns themselves. By the end of the attack, HMS Griffin had lost eighty per cent of her anti-aircraft capability. The order was given that no sailor should risk their life on deck during a drone attack. The machine-guns were silenced; more drones would get through next time.

The next morning, British newspaper headlines announced the greatest loss of life in the Royal Navy since the Falklands Conflict, and demanded retaliation. By now the Task Force was at the centre of a rotating cloud of unmanned aircraft, a cyclone of Hong Jian drones staying at the extreme range of gunfire, its numbers steadily growing. Any sign of movement on the carrier flight deck brought  drones spiralling in to make passes over it, ready to make attack runs at the first sign of an aircraft on the flight deck.

With air operations impossible, the only way of striking back would be to use cruise missiles, or to sail closer and bombard the shore with gunfire from the destroyers’ 4.5” guns. Both options were rejected as too indiscriminate.

The Admiral could not be seen to withdraw. Remaining in place seemed safe enough, until intelligence analysis of some of the downed drones showed they were carrying thermite charges rather than fragmentation warheads. Thermite, a powdered mixture of metal and metal oxide, burns at thousands of degrees.  If enough charges were concentrated in one place, they might burn through the carrier’s flight deck, putting it out of action. Or perhaps doing even more serious damage. It all depended on how detailed a knowledge the attackers had of the ship’s exact layout. Nobody dared mention the reductions in armor that had been made to cut costs during construction.

The Admiral responded angrily when told of the possible danger from the drones, which he still called ‘toy aircraft’. He refused to believe that a 65,000-ton carrier could be seriously harmed by such attacks.

“This isn’t the ******** Death Star,” he snapped at one subordinate before storming out.

The number of drones was now estimated at over eight thousand – in pure cost terms, the entire swarm cost less than a tenth as much as the destroyed F-35. It seemed likely that the whole lot would be used in one massive assault on the carrier; the question was whether there would be preliminary attacks to reduce the effectiveness of her escorts. Whoever was directing the swarm was probably doing the same frantic analysis as the defenders.

As communications flew between the task force and Whitehall, the day was saved by a small group of raiders from the Special Boat Service. Transported by submarine, they had silently landed by the docks, located and stormed the drone control facility, killing numerous soldiers in the process. The communications antenna and ground station were destroyed with explosive charges, along with a large number of crated drones. Those technicians who survived — ‘illegal combatants’  — were captured and taken back to the task force, along with electronic equipment which would reveal how the drones could be jammed.

By the next morning, the drone swarm was still circling, but now it was without guidance, no more than an airborne obstacle. So long as the pilots flew carefully, they would be able to carry out their missions, and Britain could assert control of the air once more. But the reputation of the HMS Queen Elizabeth had sustained permanent damage, and her role in future conflicts was uncertain – except perhaps as a drone carrier…

Note: While the Hong Jian drone does not exist (yet), the technologies described all exist in the present day – including small drones with solar charging and extended mission times, soaring algorithms, and swarming software to control large numbers of drones as a single unit, and all are described in Swarm Troopers.